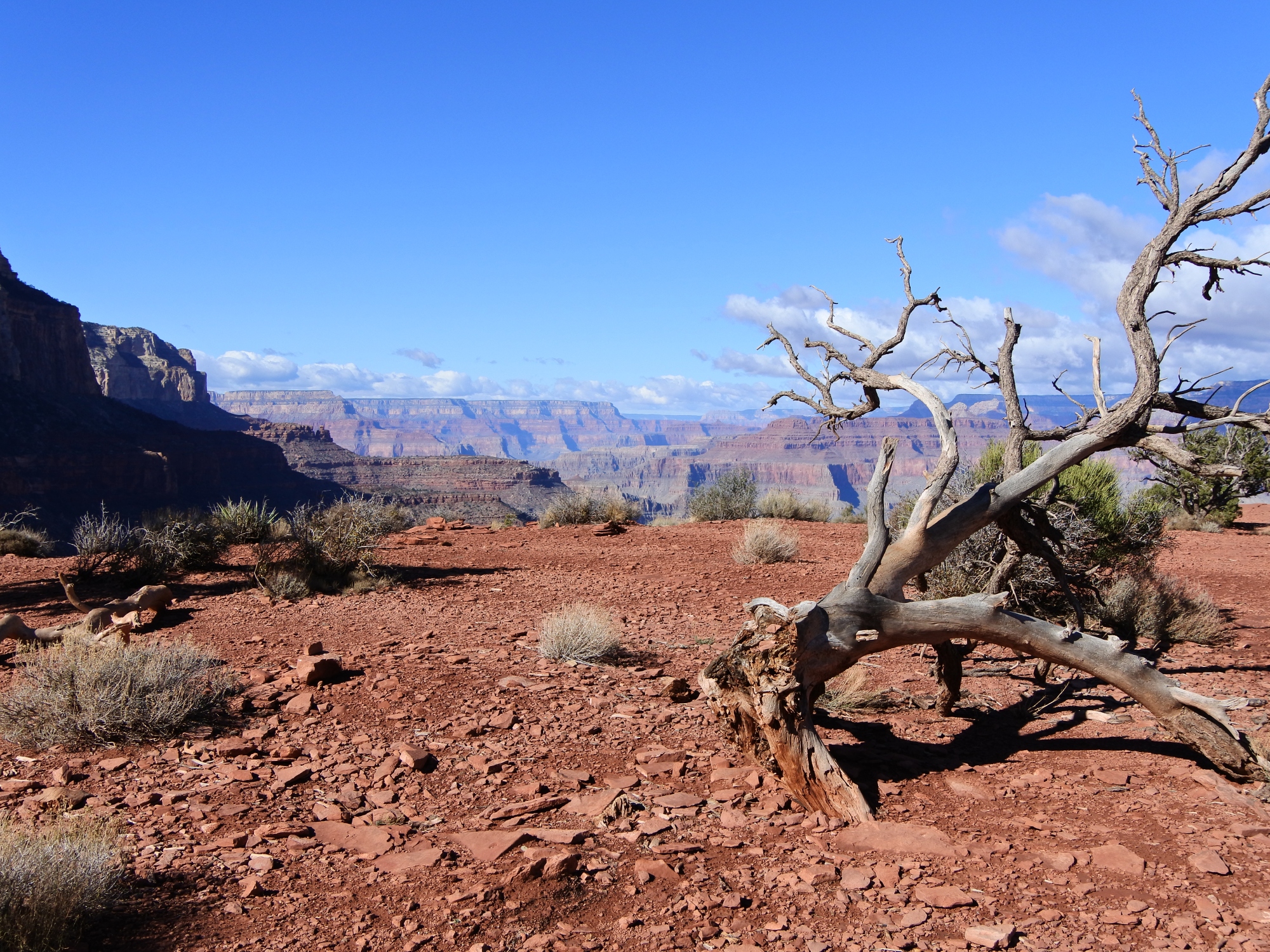 After a night at Mojave National Preserve we were on our way to the Grand Canyon! The nice weather on our drive made us hopeful that the forecast was wrong and it would be beautiful and sunny when we arrived. Just when we started believing in Thanksgiving miracles, we saw them! The massive rain clouds that seemed to just sit over the Grand Canyon hanging on for dear life. Oh well, rain was only predicted for that night, so we just had to get through one more night of rain, still plenty to be thankful for.

I’ve never seen the Grand Canyon in inclement weather, so before we made our way to our campsite, we made a stop at Mather Point to take a peek. Although blanketed in mist, clouds and general greyness, the Grand Canyon still amazed. There was a purplish hue to the canyon, the color palette of the canyon that day was one that I hadn’t seen before. The clouds prevented us from seeing far off into the distance, which made us want to see what lay out there even more. Grand Canyon, the tease! There was a light mist in the air around us, not quite rain, but it was the moisture plus the biting cold wind that made it almost unbearable to stay outside long. Without a hat or gloves, I would have certainly gone back to the van. But thankfully we were covered, literally! Walking a bit further than the main lookout points, we were easily able to get the Grand Canyon to ourselves.

We had reserved 3 nights at Mather campground, so after dinner of burgers at the Bright Angel restaurant (surprisingly at the Bright Angel Lodge 🙂 ), we headed over to our site and hunkered down for the night. Site #180 was nice with a half circle, level driveway, plenty of space between campsites, and close to the Greenway Trail to jump on with bikes later. One downside of the spot is that you can see cars in the distance driving on one of the major roads. That night we were surprised at how many campsites were occupied. Not the “sparse” Grand Canyon that we had expected, yet not crowded either. We went to bed really late, like 7:30 pm (such rebels!) and slept through all the rain and bad weather. In the morning we woke up to a damp, but beautiful sunny day! Hiking the South Kaibab trail was the first thing on our agenda, so we packed up the van and headed towards Desert View Drive as fast as we could.

Since the only way to get to the South Kaibab trailhead is by shuttle (or walking of course), we drove over to Desert View Drive, parked the van at the eastern end of the Pipe Creek Vista area, then walked about 0.5 miles on the Rim Trail to the trailhead. If you can get there early enough there is closer parking in a picnic area across from the gate, the one that only allows shuttle access. There is always parking at the Visitor Center lot and taking the shuttle that drops you off right at the trailhead. The Rim Trail in this area is lightly traveled with gorgous views of the canyon. It took all our will power to keep from stopping every few minutes to look at the view, I’m not sure how we got these pictures ; ).

The South Kaibab trail is known to be heavily trafficked so we wanted to get an early start. Unfortunately, early wasn’t that early for us that morning because it was too darn cold to move fast. So we were relieved to see a shuttle pass us that seemed to be pretty empty. However, right when we arrived at the shuttle stop for South Kaibab, another of those shuttles pulled up right in front of us filled to the brim with people and started to let everyone off. We panicked, going every which way to find the trail, and immediately jumped on what we hoped was the right trail. No start of the hike pictures that day!

Going down the trail was great. There was definitely people on this trail, you could even say it was heavily trafficked. Happy, happy, joy, joy…until it was time to climb back up. The scenery on the hike was spectacular, different than the views back up top from the Rim Trail. The unique views and interesting trail are definitely worth experiencing!

This hike was pretty great, but if you can do this hike when there wasn’t heavy rain the day before, I think it could be even better. At times the middle portion of the trail had to be avoided because of all the mud in the middle. I don’t mind a little mud, but when mules walk through them and kindly mix their “offerings” in that mud, I do whatever it takes to avoid that mud. If I have to walk on the edge of the trail with a sheer drop off, so be it (nah, we didn’t get that close). Then there are the puddles, orange-colored, some with mule droppings floating in them. Didn’t want to step in those either. Nope! Needless to say, the mud and puddles made the hike a bit more challenging, so if you can do this hike when the trail is dry, it would allow you to focus more on the amazing views rather than figuring out the best way to keep mule poop off of you.

We made it down to Cedar Ridge (about 1.5 miles), took in the views and had a snack. We were planning on hiking down to Skeleton Point (3 miles), but at this point I was getting pretty nervous about going back up. There were more people on the trails now making it more of a challenge to get around the mud and puddles. So, Cedar Ridge became our turn around spot. It’s a beautiful rest spot with a restroom and plenty of areas you can wander off to sit and admire the views all around.

Speaking of the trail going back up, it’s a tough one. Except for the trail runner guy who was sprinting up to the top, jumping over puddles and making it look way too easy. Hey man, at least pretend to breathe hard when you pass us :). Be prepared physically (high altitude), remember your food and water, and leave extra time for your climb back up. We actually saw lights from a flashlight on the trail when we drove past after dark. Hope those hikers did that on purpose and not misestimate the time to get back (um, navigating puddles with mule excrement…in the dark).

After the hike, it was time to explore Desert View Drive. This road is roughly 22 miles with plenty of places to stop including vista points, picnic areas, a museum, and a watchtower at the end of the drive. Our first stop heading east was the Tusayan Museum and ruins.

There is an 800-year old Pueblo Indian ruin at this site along with a small museum with various exhibits/displays. Reading the information signs and taking a stroll around this area was a nice change to the physical activity we had just finished. This ended up being a quick stop since we got through the exhibits and information signs pretty fast.

The watchtower was located at the end of Desert View Drive and was a very popular destination. This structure was modeled after a Puebloan watchtower and is open to park visitors to enter and climb to the top to look out the windows. There is an enormous parking lot which thankfully was only half full. Yet this place was crowded. This was going to be a quick stop, but when they announced that entry into the watchtower would be closing shortly, we just had to enter. I mean we were lucky enough to be there before closing! Well, little did we know how many “lucky” people there were touring the watchtower also. It all felt a bit claustrophobic being herded up the stairs with a mass of people to look out the windows. I think that it would have been much more enjoyable had there been some breathing space to look around or even be able to stop and take a picture. So, apparently no one got the memo that the Grand Canyon at this time of year was supposed to be sparse. I was starting to need my solitude with nature (which we did get in the following days thank goodness).

After we made our way outside the watchtower (no easy feat) we headed back on Desert View Drive, looking for places to stop to take our sunset picture. Getting a (decent) sunset picture has been on my bucket list forever and up until now I have not been successful (bad camera, bad photographer-that’s me, etc…). 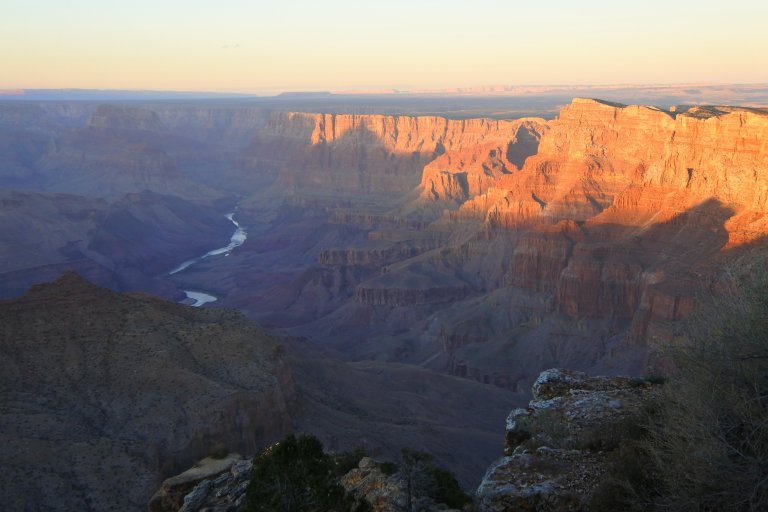 Getting sunset pictures of the Grand Canyon meant so much to me, I can finally check that off my bucket list. I love all sunsets, but the sunsets at the Grand Canyon take it to a whole other level. After the sun went down, the temperature plummetted (at least for us Californians they did) and we experienced one of the coldest nights in the van yet (18°F). Grand Canyon in November is beautiful, but very cold. The campground became much quieter that night, many (not all) of our tent neighbors left, leaving RVs and campervans. We never appreciated the heater and our cold weather gear like we did that night!