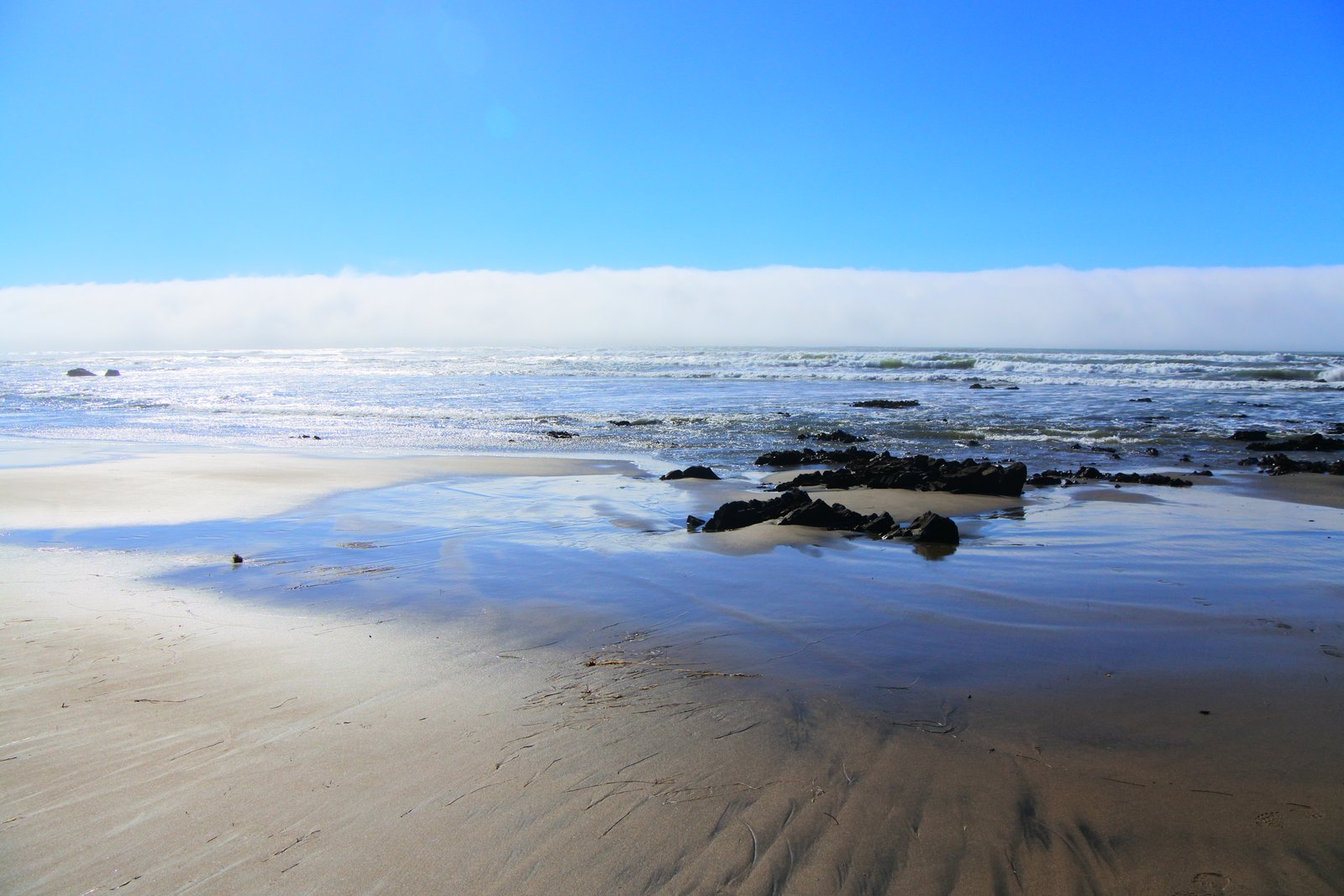 On a beautiful sunny morning in October (2015) we decided that we just had to see the ocean. It was imperative. Somehow we were up early enough, miracle of miracles, to make this a reality. We loaded up the campervan with food, water, jackets, camera, and a change of clothes. I’m not sure why I always pack a change of clothes, but every single time I don’t, I always get in a situation where I really wished I had (food likes to jump on me). So, I bring them to ward off evil. We decided to head to Half Moon Bay knowing that we were going to hit traffic because October is pumpkin patch time on Hwy 92 and this road is known to become a parking lot this time of year. Lucky for us, traffic didn’t get stopped up until the downhill portion, not bad. Leave early or expect delays, that’s all.

It was a gorgeous day, people looked like they were enjoying picking out their pumpkins, and we were just debating on which beach to hang out on, when quarter of a mile later, bam, we hit a wall of fog. The difference in weather was astonishing! We adjusted our expectations for the morning and continued along south on Hwy 1. Morning fog is common along the coast, so we hoped we could wait out the fog and see some sunshine later. We passed San Gregorio State Beach, then Pomponio State Beach, no sun. Finally, we pulled over on one of the many pullouts to have a midmorning snack. The fog gave this place a mystical feel, like someone turned the dry ice machine on and blanketed the van with fog at times.

Continuing south, we stopped at Bean Hollow State Beach for a coastal hike. There are two parking lots, one for Bean Hollow, Pebble Beach (north end) and the other for Bean Hollow Beach (south end). They are about a mile apart and are connected by a beautiful coastal trail. This trail has it all with beaches, access to tidepools, views of harbor seals resting on the rocks, and stunning landscape wherever you look. This is somewhere we love to come back to time and time again. We pulled over and parked about halfway between the two parking lots and jumped on the hike about midway, exploring south then north. I mentioned where we parked because straight ahead towards the ocean is a great place to watch the seals and to tidepool. We usually spend a couple of hours exploring the tidepools in that area, but we were a bit cold that day, so we decided to continue on.

The sun finally came out! The fog was still looming off the coast, but the sun warmed the day up considerably. Time to stop again. This time we were near what we’ve been calling our “secret” beach even though it’s probably not very secret since there is a small parking lot and well maintained trail that leads down to the beach. I just looked on Google maps, the trail is called Whitehouse Creek Trail. To find the parking lot when traveling south on Hwy 1 is a bit tricky. After seeing the sign for Costanoa (which is on the left), start preparing to pull off the road on the right side, immediately where the trees end and the landscape turns into open grassland (on the right). The small dirt parking lot is directly across from Whitehouse Canyon Road. Walk the trail through the grassy area until you get to a beach access (with stairs even). 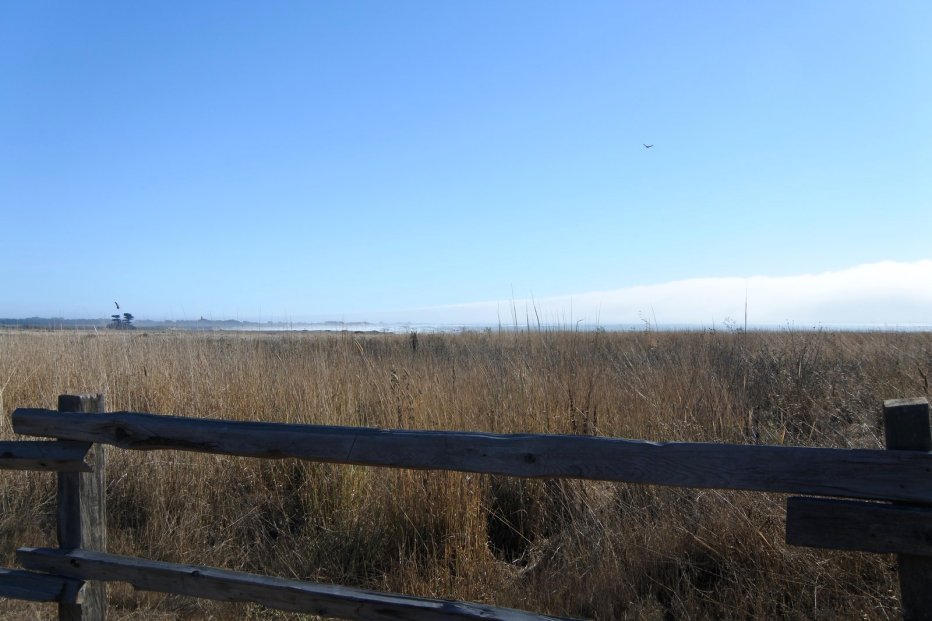 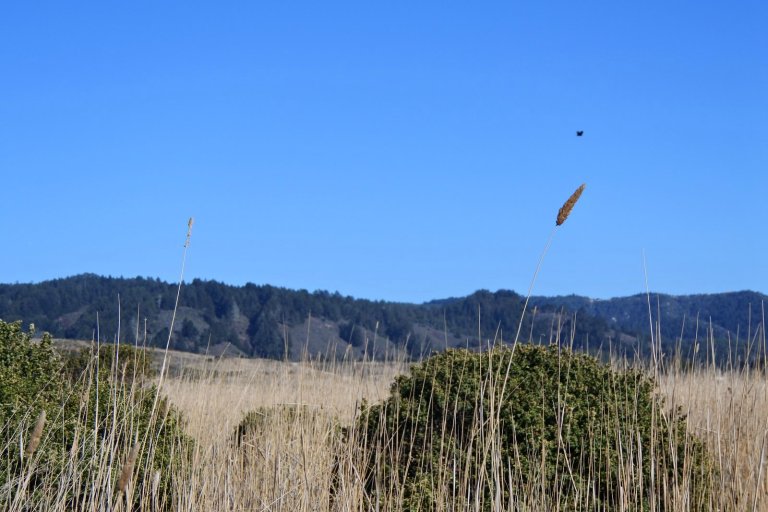 The stairs/trail leads down to a beautiful, secluded beach. We’ve seen people in this area before, but if you go further to the left through a rocky area, you will be rewarded with a large expansive beach which you’ll hopefully have to yourself or at least some parts of it. There’s something about being on a beach by yourselves that allows you to fully take in your surroundings and just breathe. That saying, “not a care in the world,” definitely applies here.

Word of warning, there are no restroom facilities here or at the trailhead. Our campervan has a bathroom, but even then it’s a bit of a trek from the beach to the parking lot, so plan accordingly. I’ve never been, but Costanoa is just north of here. It has a lodge, restaurant, campground, cabins, and general store. Also, Ano Nuevo State park is only 4 minutes south. Grateful for the sunny weather and not wanting to push our luck with the fog which was creeping back in, we called it a day after “secret” beach and went home. 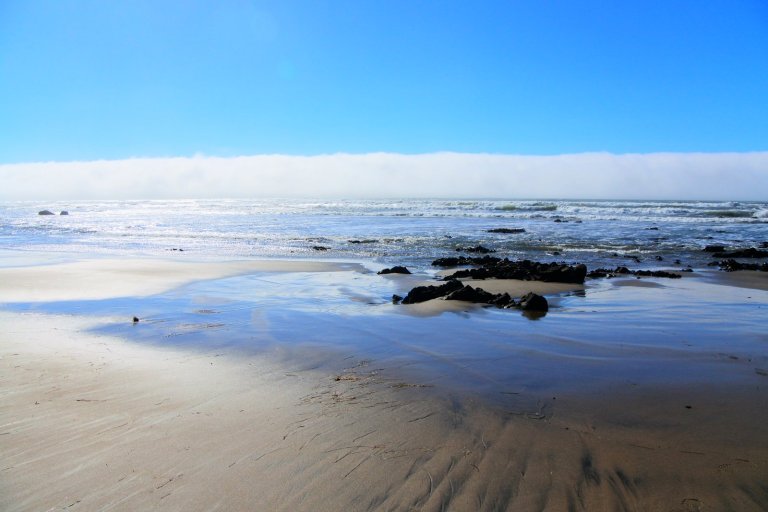