Our first encounter with an elephant seal happened many years ago when we didn’t even know what an elephant seal really looked like. That day we had arrived at our “secret” beach ( about a 5 minute drive north of Ano Nuevo for a beach day and found this gigantic animal lying right in the middle of the beach. We couldn’t see the head and it wasn’t moving at all, so we questioned whether it was even alive. We gave it a wide berth and walked past it to another area of the beach (out of sight of it). A couple of hours later on the way out, we passed by it again and just as we were commenting on how sad it was that the animal was dead since it hadn’t moved at all, it suddenly looked up and made this deep loud (really loud!) gutteral noise. Let me tell you, we grabbed my daughter so fast (who thankfully was little at the time!) and high-tailed it outta there. The thing about sand is that…you just can’t run fast on it, so the elephant seal must have been laughing hysterically at our attempt to make a quick get away. I know I would have been. I’m so glad no one else was there to watch us panic and “run” through the sand carrying (and periodically dropping and retrieving) our stuff and daughter (who we almost dropped) at our snails pace. After doing some research at home we found out that it was a male Northern elephant seal. I won’t be forgetting what an elephant seal looks like anytime soon.

Last Saturday we headed out to Año Nuevo State Park to check out how the elephant seals were doing this time of year. The Año Nuevo state park website mentions that the female and juvenile elephant seals are back and molting now (May-June) and the park is open for self-guided hiking with a visitor permit. At other times of the year, a docent led guided tour is the only way to see them. Elephant seals can be observed in Año Nuevo year round and this park has been described to be one of the largest mainland breeding colonies in the world. On the Friends of the Elephant Seal website there is a calendar which describes what is happening on the California coast every month with the Northern elephant seals.

Once we arrived at Año Nuevo we headed directly to the visitor center to get our visitor permits. They basically just give you a pamphlet that has a map, rules, info and the words Visitor Permit on it. They only issue permits from 8:30 am to 3:30 pm and expect you to be out of the viewing area by 5 pm.

There is a Marine Education Center that is worth checking out, but since we have viewed the exhibits before and were antsy to see the elephant seals, we went ahead and just started our hike.

The hike to the viewing platform was an easy 1.6 miles with a small section where you have to walk up and down a dune. It’s a very pretty hike with sweeping coastal views, a pond where you can view a variety of birds and wide open fields. When you get to the staging area at about 0.9 miles, a very friendly docent greets you and shows you on the map on your visitor permit which viewing platforms are open and gives you directions on how to get to them. 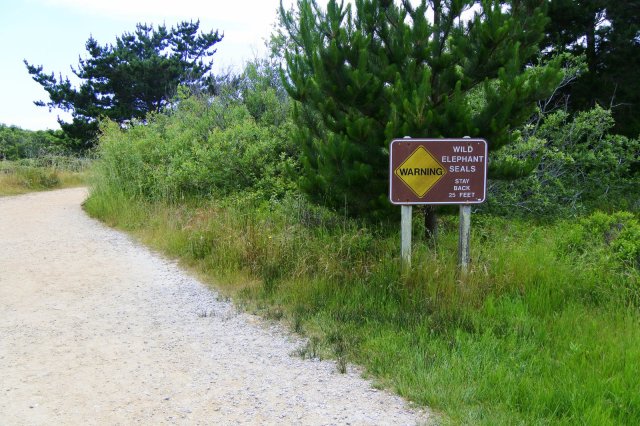 That day we were sent to the Bight Beach viewing area where we were greeted by two more very friendly (and might I add very knowledgeable) docents. As you walk towards the platform on the boardwalk you actually smell and hear the elephant seals first. 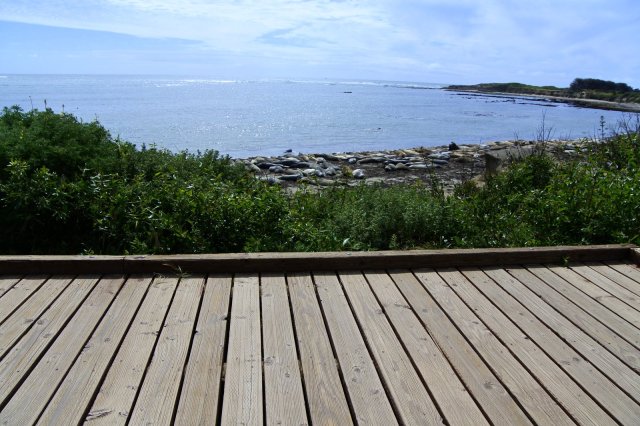 We LOVE to watch wildlife, so we spent a very enjoyable hour just observing the elephant seals, talking to the docents and walking from one platform back to the other to watch the different groups of elephant seals. There is even a couple of powerful viewing telescopes which allowed us to see things very far away.

The adult male elephant seals differ from females in that they have a proboscis (nose) and are much bigger in size. The name elephant seal came about because their proboscis resembles that of an elephant’s trunk, which I figured most people assumed once they saw an adult male.

There is an island directly across from the beach which looks like it has a haunted house on it. This house used to be the house where the lighthouse keeper and his assistants lived back in the 1900s. Unfortunately, the lighthouse tower was torn down to prevent any danger to the wildlife that live on the island. Public access is not permitted, so now it is overrun with wildlife, and it can be viewed through the telescopes at the viewing platforms. 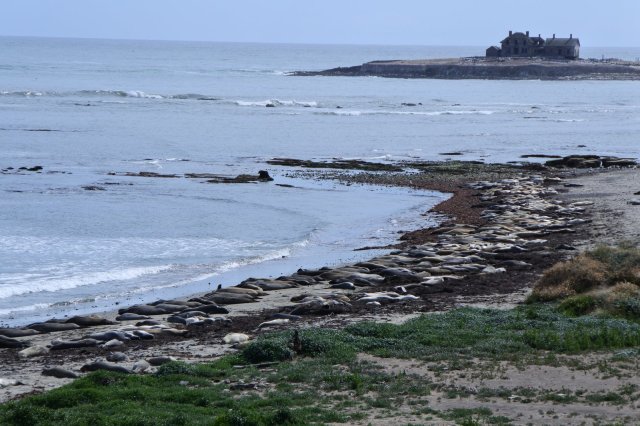 A couple of Decembers ago, we visited the Piedras Blanca rookery which has an extensive viewing area/trail behind a fence to observe the elephant seals. There is a large parking lot right off of Hwy 1, about 5 minutes north of Hearst Castle that you can park in for free. Viewing areas are present on either end of the parking lot and it’s a good idea to take a look at both, you don’t want to miss anything. When we were there, we were able to observe elephant seal pups, probably just recently born, only in the area south of the parking lot. On the north side we were able to see many male elephant seals, or bulls engaging in their competitive behaviors. A lot happens in December, the bulls arrive and fight for dominance, females begin to arrive, and birthing and breeding begin.

There was a male and female elephant seal (who were married and loved each other) who chose right in front of us to start “breeding.” It got reeeeally uncomfortable when a little boy started asking a bunch of reeeeally specific questions reeeeally loudly. The parents, looking horrified knowing the huge mass of people were listening, grabbed their kid and took off mumbling something about telling him later and the kid of course was asking at the top of his lungs why they had to leave. Once they were out of ear shot, the crowd just let out a collective breath and started laughing (with the family, not at them). Kids do say the darndest things!

Elephant seals are fascinating animals with a complex migratory pattern. At one point (early 1900s) they were hunted to the brink of extinction for their oil-rich blubber, but with the help of government protection laws their populations have recovered to an estimated 150,000 seals. We, Californians, are lucky to have them grace our coastline. I hope you get the chance to observe these beautiful animals in their natural habitat.

I was going to post about a SF bike ride, but I haven’t been able to get the lunch we had on that ride out of my mind. Seriously, I’ve been figuring out how to get back there since last Thursday. The fried chicken breast sandwich from Sessions at the Presidio looks like any fried chicken sandwich, but the Fresno chili sauce, coleslaw and pickles add a whole other dimension 😋 And don’t get me started on the fries with aioli sauce... my goodness!! It didn’t hurt that we sat on a bench in front of the restaurant on the beautiful Lucasfilm campus with a great view (don’t forget to find the yoda statue!). #sessionsatthepresidio #sanfranciscofood#bestfriedchickensandwich #lucasfilmcampus #yodastatue #yodafountain
Please help yourself to a donut 😊 Donuts are my kryptonite, what’s yours??
Filoli Garden Inspiration. Their formal garden is showcasing how edible plants can be used decoratively and artistically to create a beautiful display. My favorite flowers, hydrangeas, are blooming, the rose garden is so colorful, many cut flower ideas, the trees in the orchard are brimming with fruit... just so much to see! #filoligardens#filoligarden#formalgardens
I grew and tasted ground cherries for the first time...and I have to say that I love them!! ❤️ The ones in the pics are the pineapple ground cherries (I bought the seeds from Botanical Interest). They are so easy to grow and fun to harvest. Basically, they are ready to eat when they fall to the ground! They are in the tomatillo family so they have the same outer covering and similar looking fruit in the middle. However, they are sweet (not overly) with a hint of pineapple flavor. Nature’s candy!
One of my favorite ways to explore San Francisco was on a weekday bike ride on a perfect sunny day, following my college buddy who is the best SF tour guide ever. I’ll be honest an electric bike made it that much more enjoyable 😂 We started in the Sea Cliff area, headed to the Legion of Honor for a brief look around, then to Ocean Beach passing through Sutro Heights Park to see the view and ruins. We made a quick stop by the Cliff House (behind it there is a viewing platform) to get some pics of the ocean as well as the Giant Camera. Then it was smooth sailing on the Great Highway which is closed to cars right now. Picked up sandwiches and wine at Palm City Wines, the garlic roast pork hoagies are absolutely amazing!! A leisurely lunch on Ocean Beach is a must with a lunch like that. Then a ride through Golden Gate Park staying on the roads that are closed to cars right now before heading back to where we started (Lake Street is currently closed to cars right now as well). I had to experience it to believe it, but riding a bike (an electric bike!) in San Francisco was a very fun way to see the city! #bikeride #bikeridesanfrancisco #palmcitywines #giantcamera
Happy National Selfie Day!! 😂 It gave me a legitimate reason to post a selfie with my daughter (At least that’s what I’m telling her!!) More importantly though, it’s National Chocolate Eclair Day tomorrow!!
Heading to the coast to cool off during the heat wave. Dinner at Ketch Joanne Restaurant and Harbor Bar - delicious seafood (especially the clam chowder bowl, fish and chips, and crab sandwich). Strolled Dunes Beach, one of the beaches of Half Moon Bay State Beach. #ketchjoannerestaurant #dunesbeach #halfmoonbay #halfmoonbaystatebeach
Beautiful morning hike on the Lands End Trail in San Francisco. Amazing views that almost make you forget about the great workout you’re getting! Almost 😂. #hikes #sfhikes
My garden... aka My Happy Place 😊 It’s an experimental year, trying out 15 varieties of tomatoes and various growing methods. Also trying out varieties of cucumbers, peppers, eggplants, tomatillos, squashes, corn, beans, melon, watermelon, asparagus, strawberries, and so on... Learning so much, but so much more to learn 😊 So much information out there, thank you to all the people who share about their gardens!! #gardens #gardenveggies #growingtomatoes