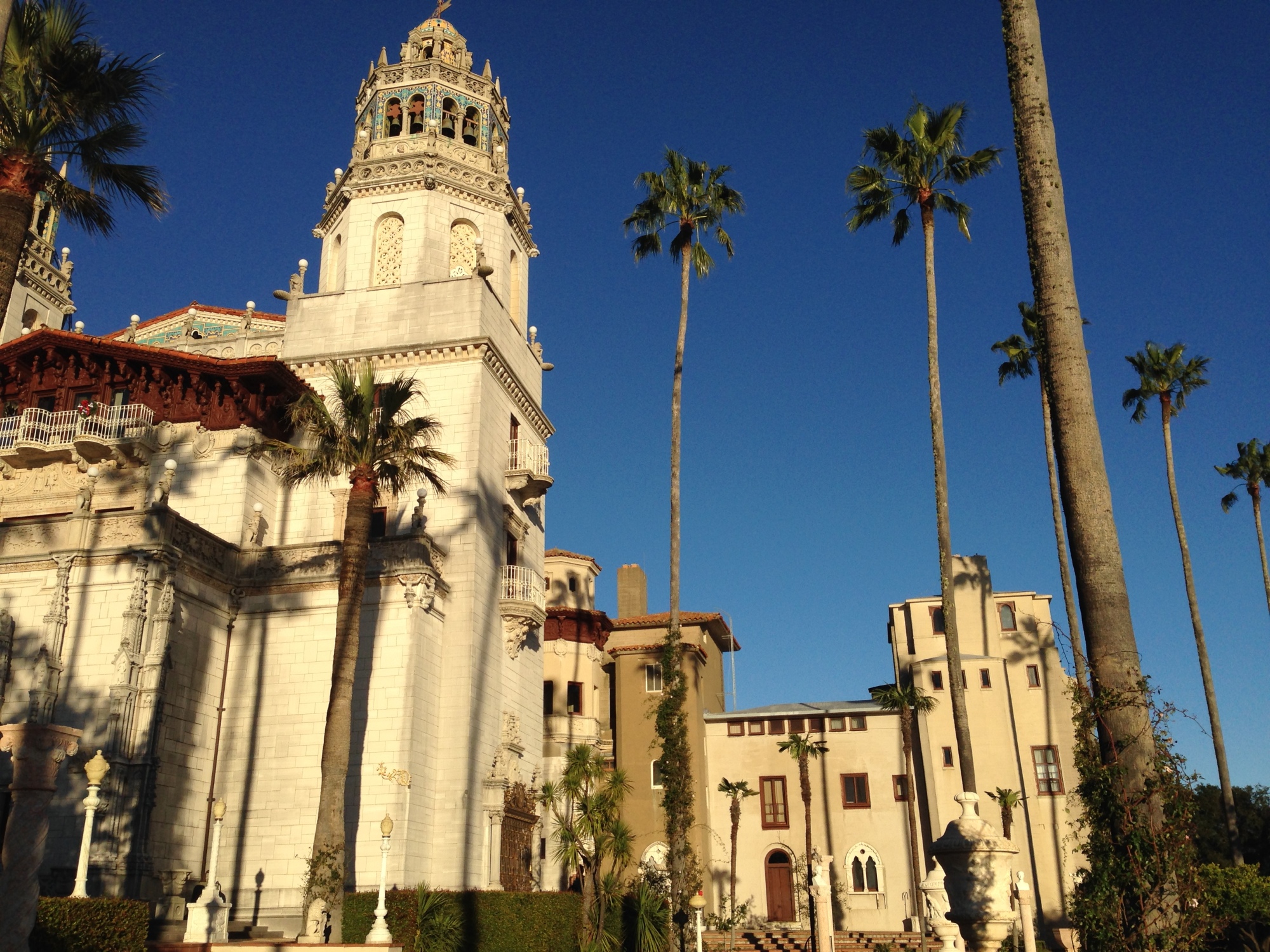 We love to be active and enjoy the outdoors, but hiking is not necessarily the activity of choice when we get together with grandparents. No problem, there are plenty of outdoor activities we can all enjoy. One of our favorite excursions that we took with my in-laws was a trip to San Simeon on the central Californian coast to tour Hearst Castle. Hearst Castle has the distinction of being a California State Historical Monument, and has been part of the California State Park system since 1954. From the Bay Area it’s about a 3 1/2 hour drive, so its close enough to make it a day trip if you leave early. However, to keep things relaxed and low key in the spirit of the holidays we spent the night in San Simeon the night before our tour, giving us time to explore the quaint nearby town of Cambria. We stayed in a motel this time, but my hubby and I have camped at the campground in San Simeon State Park before (it was our second camping trip together before we were married, where we encountered a pack of very persistant, toothpaste-loving, serious size-enhanced raccoons, but that is another story… and we went a long time ago so it must be totally different now).

Hearst Castle is the former residence of the newspaper tycoon William Randolph Hearst. It’s not exactly what I envision a castle would look like (where’s the moat? the turrets? and especially the dungeon?), but it is grand and opulent with an impressive collection of museum quality art. It’s more like a super extravagant mansion with a cathedral-like façade. Touring a rich person’s former residence is not usually high on my list of must see places, however, the history of how this place was built (designed by a woman architect, Julia Morgan) and how it related to what was going on in the world around them was very interesting. William Randolph Hearst was so influential in the media world that at one point nearly one in four Americans got their news from a Hearst paper. I remember my family having a subscription to the San Francisco Examiner when we were growing up. This newspaper was the first one acquired by Mr. Hearst. Actually, it was given to him by his father who had acquired it as a gambling debt! He soon purchased the New York Journal, and the rest, as they say, is history. On the political front he was elected as a Congressman from New York (twice) and even tried to get elected as Governor, though unsuccessfully. He also extended his influence into radio broadcasting, and produced over 100 movies as well. He was plain and simple, a brilliant businessman lucky enough to inherit some very decent start-up money.

Mr. Hearst was able to amass a large art collection, apparantly having spent $3.5 million on just art during his lifetime, and many of these items were displayed at Hearst Castle. When he was ten-years old, he toured Europe with his mother, and what he viewed and experienced on this trip inspired him to spend so much time, effort and resources to recreate the grandeur that he saw. He and architect, Julia Morgan, spent over 28 years (1919-1947) doing this until he had to move for medical reasons near the end of his life. The building of Hearst Castle was the project of his life, and with his wealth to back up his visions, and a skilled architect to make his visions a reality, there was no limit to what could be accomplished.

When I heard the story of how a trip that he took with his mother influenced him so much, it made me think about how traveling with my parents greatly influenced what I like and enjoy doing today, and how we, as parents, are doing our darnedest to create childhood experiences for our own kids that will positively influence them in their adult lives. The effort that we’re all making – it’s making a difference!

Hearst Castle has 56 bedrooms, 19 sitting rooms, 127 acres of gardens, an impressive indoor and outdoor swimming pool (the outdoor Neptune Pool was still under rennovations). It even has a private zoo among many other luxuries such as tennis courts, movie theater and an airfield. You know, the usual stuff :). Mr. Hearst entertained the Hollywood elite, famous athletes, cultural icons, as well as influential politicians at Hearst Castle, and there was much name dropping during our tour. He married Millicent Willson (a showgirl who was 18 years his junior) and had 5 sons with her, but she maintained a separate residence in New York. It turns out, he was residing at Hearst Castle with his mistress, actress Marion Davies. She was the one who hosted and threw the lavish parties at Hearst Castle. Scandalous!

After reading about the tours on the Hearst Castle website, we reserved our spots on-line for The Grand Rooms Tour and Cottages and Kitchen Tour ($25 adult, $12 children, ages 5-12). Having reservations, we knew exactly when our tour was going to begin and that our group would be able to be together. You can purchase tickets at the Visitor Center, but during busy times, tours do fill up, so making a reservation ahead of time will ensure you won’t have to do any unnecessary waiting.

On the day of the tour  we drove up to the Visitor Center where the tour begins, checked-in and walked around until our tour time. There is a William Randolph Hearst exhibition to give you some background before the tour. Also, a rather large gift shop, as well as a cafe and snack bar to buy food. At the designated time, you are led to a bus loading area where your tour group waits until your bus arrives. The bus takes you on a 5-mile bus ride (about 15 minutes) up to the residence.

The Grand Rooms Tour and the Cottages and Kitchen Tour were both one hour long. After the tour you can remain on the hilltop and explore the gardens and grounds then take a bus back on your own time when you are ready. If you are going on multiple tours, you still have to go back to the Visitor Center and be there at the bus loading area for each tour.

This tour started off in the wine cellar where my daughter kept nudging me with her elbow me and asking me if I was in heaven. After everyone sufficiently came to the conclusion that I must be the wino of the group, we moved on to view the guest cottage, Casa del Mar.

You have to walk through the indoor pool area to get to the bus stop to take you back to the Visitor Center. It’s a nice way to finish the tour.

Included in your ticket price is a showing of “Hearst Castle- Building the Dream” (40 minutes) on a 5-story screen theater back at the Visitor Center. We watched this movie after our tours and it helped answer any questions we still had and summarized nicely what we learned on the tours. Overall, the tours at Hearst Castle were a fun way to spend the day with plenty of time to enjoy the outdoors and get a nice walk in.

Worthy side trips:
San Simeon Beaches
Although it is Hearst Castle that draws almost a million visitors per year to this remote area of California, San Simeon has some beautiful and uncrowded beaches to explore. Moonstone Beach (near Cambria) has a one-mile boardwalk for the perfect coastal stroll. Don’t miss having a Hearst Ranch burger at Sebastian’s General Store Cafe, located right inside the William Randolph Hearst Memorial Beach (right across from the entrance to Hearst Castle).

Piedras Blancas Rookery
This is a great place to view elephant seals up close in a protected habitat. It is located just 5 minutes north of Hearst Castle and if you visit there in December like we did, it is their birthing season. The first births occur during mid December, so if you’re lucky you will be able to see cute baby elephant seals. Check out the Piedras Blancas Rookery website to find out what’s happening when you plan to visit.