Our recent Sequoia and Kings Canyon National Parks trip was a redo trip for me. The first time my hubby and I visited many years ago, we (ok, it was me) locked ourselves out of our rental car at the campsite (Azalea campground) and had to walk to the Visitor Center to call someone for help. Besides feeling stupid, the one hike that we had time for just didn’t impress me, especially having visited Yosemite recently. For all of these years, I’ve had this not-so-great impression of Sequoia NP. So, in 2017 I wanted to try again and do it right this time. I made sure to plan a little better and put some effort into making the most of our 4 days, starting with making our camping reservations 6 months in advance. I made reservations in the Grant Grove area at Sunset campground. (Also in the Grant Grove area, Azalea campground has 110 sites and Crystal campground has 36 sites on a first-come, first-served basis). What a different experience we had this time!

Sequoia National Park (along with Yosemite) is the second oldest National Park in the US (Yellowstone is the oldest in case you were wondering) and is located in the Sierra Nevada mountains southeast of Yosemite NP. This park is famous for its giant sequoia trees, including the General Sherman tree which has the distinction of being the largest tree in the world (… the world!). Mt. Whitney, the highest peak in the contiguous US is also found within the park borders. Kings Canyon about five decades later was granted national park status and together they combine to form Sequoia and Kings Canyon National Parks. Although they are jointly managed, they each have their own Visitor Center and feel like different parks. Kings Canyon is famous for its canyon with the Kings River running through it, as well as its beautiful backcountry areas. It also has giant sequoias as well, including the General Grant tree, the third largest tree in the world.

During the time we went, July 2017, the southern section of the road through the park was closed, so everyone had to enter through the Big Stump entrance off of Hwy 180. Which probably explains the long wait to get into the park on a weekend arrival. Today, the nps website states that there is an hour delay if you enter this way (with vehicle size restrictions), so hopefully, the situation will continue to improve. The nps website also warns of dangerous river conditions as four people have drowned already. The weather apps all predicted the temperature of Sequoia National Park to be in the mid to high 60s, and we were anticipating some comfortable weather. However, after driving through Fresno in over 100º temps and not seeing the temperature gauge decreasing much as we climbed up the road to the Sierras, we soon realized the predicted temps were way off. It was uncomfortably hot to the point that we skipped the hike we had planned for the afternoon. I guess it’s good to be prepared for all kinds of weather when visiting the area.

Sunset Campground, site #97: (Kings Canyon National Park)
When we got to the campground kiosk, the ranger told us the water main had broken, so there was no running water (there were porta-potties and handwash stations). Our campervan has a 20-gallon tank reservoir which we had filled up at home, so we were comfortable with the situation. But even if you didn’t have enough water, there was a market near the Kings Canyon Visitor Center just up the road where you could buy water. As we drove in the opposite direction on the campground road (as the ranger told us to because of road closures from the water main break), we noticed a number of campsites had tape across them. We were a little nervous as to what condition the campsite was going to be in, but we were happy to drive up to a beautiful open site with big boulders, logs and of course many towering trees. One neighbor (on the right) was somewhat close, but other than that, this campsite was pretty private. Unfortunately for our campervan, there was no shade during the day, so we were glad that evening brought cooler weather.

What sets this campsite apart is the area behind the boulders. If you follow the trail past the boulders, through a wooded section, there is an opening with a picnic bench, more boulders, and view of the forest. It is such a private, serene, shady, and just beautiful space! We set up our camp chairs in the shade, did some watercolor and read books as we cooled off before dinner time. 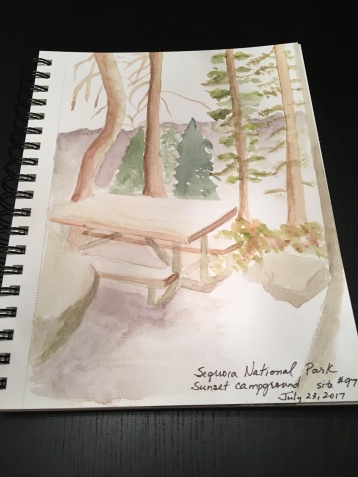 Our stomachs told us it was time to prep dinner, so we headed back and got our ingredients to throw in foil packets. With black bears in the area, I did NOT want any food smells in the van, so making foil packets on the picnic bench, cooking them on charcoal in the fire pit, then throwing the foil away was perfect. No dishes to wash and no food smells in the campervan!

Night time brought a much needed cooling off period, and we slept very comfortably although at some point in the middle of the night I thought I heard something passing through our campsite and couldn’t shake off the feeling that a bear was going to smell the bread I forgot to put in the bear locker and break one of our windows. A whole incident was going to happen because I was too lazy to walk over to the bear locker. Thank goodness nothing happened, but I can assure you I had played out a number of scenerios in my head to keep the family safe and stayed awake for a good many hours to make sure “the bear” didn’t try anything.

A good night’s sleep (for the most part) with cooler temps rejuvenated us and we woke up ready for a full day of exploring. We started by heading to see the General Grant tree in Grant Grove. This grove was found shortly after the Civil War, which explains why many of the trees were named after Civil War generals.

Grant Grove (King’s Canyon National Park)
Grant Grove is very popular so, if you can manage it, getting there on the earlier side is better. We got there at around 9:30 am (on a Monday) and there were plenty of parking spaces, but about 45 minutes later when we were leaving, the parking situation was another story and there were many more people heading out on the trail. The Grant Tree Trail was a short 0.8 mile loop that takes you past the third largest tree in the world. There were many interesting things to see along the way and plenty of shade to keep the walk pleasant.

Finally, we found our way to the General Grant Tree. This tree has been given the distinction of being the Nation’s Christmas tree and a memorial for the men and women who gave their lives in service to their country. Every year during the Christmas ceremony, a wreath is laid out at the base of the tree to remember those who gave their lives. 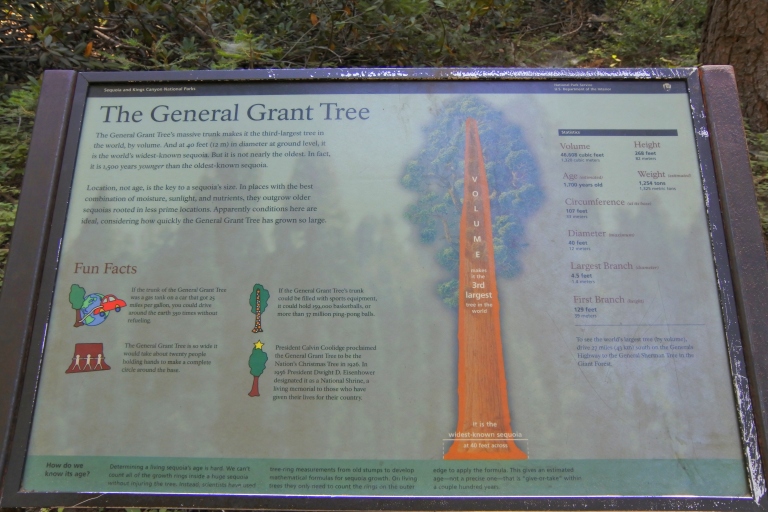 After the short but invigorating hike to see the General Grant Tree, we were excited to drive along the King’s Canyon National Scenic Byway and explore the canyon area. Kings Canyon NP has the deepest canyon in North America (even deeper than the Grand Canyon), featuring tall mountains, Kings River, waterfalls and lush green meadows. Kings Canyon beautifully showcases the Sierra Nevadas. But I want to give Kings Canyon its due and save this area for my next post…

I’ll leave you with a quote from John Muir, known as the father of the National Parks, who was instrumental in making Sequoia into a national park (along with Yosemite, Grand Canyon and Mt. Rainier):

“Another glorious Sierra day in which one seems to be dissolved and absorbed and sent pulsing onward we know not where. Life seems neither long nor short, and we take no more heed to save time or make haste than do the trees and stars. This is true freedom, a good practical sort of immortality.”